Hi everyone! I got some great news, as you may know Teepublic has a featured artist program, where each month they feature new artists and for this month I’m one of them! You can see the featured page here.

I’m very happy they are taking so much interest in new small artists. If you like indie art prints then I definitely recommend you give their shop a look.

And as always if you have any questions or suggestions feel free to write them in the comments bellow! 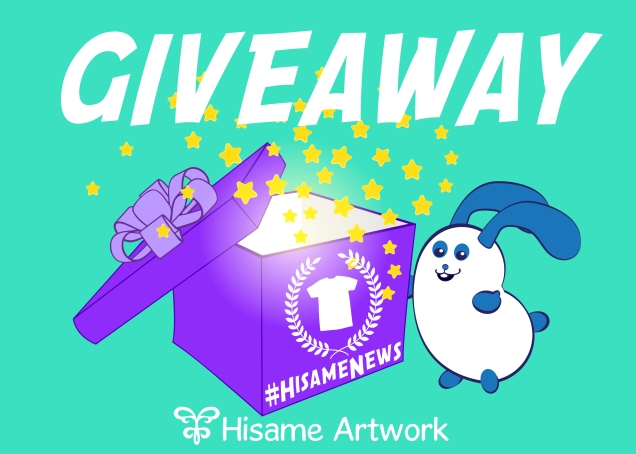 Hi friends! I’m happy to announce that Teepublic will be sponsoring my Black Friday giveaway!

I love giving gifts and I want to thank you all for your ongoing support for my projects and with their helps I can give a little bit more back to you.  Teepublic will be sponsoring me with a art-print with one of my designs and I will be announcing the details to the event in the coming weeks so stay tuned.

If you have any questions or suggestions feel free to write them in the comments bellow.

I wish you all a lovely weekend!

While there is a significant difference between painters, graphic designers, rappers , opera singers and so on money is probably a concern for all at various points in life. So why did we choose this life?

I chose this path  because I loved knowledge and learning new things since I was little and I’ve always been better at drawing than everyone around me. So I decided that it was a good indication I had a talent for drawing.

I had and still have various artists in my family and while they aren’t starving they are not billionaires either. The older ones have stable secure jobs that allow them to raise a family and “in this economy” a accountant or cashier is no safer than an artist from what I can tell. I believe we as a society place too much emphasis on financial success and not enough on growing and what we can universally agree on, becoming a good person.

At the end of high school you are told to make a life defining choice. If your parents are very involved in your life then they will make choices for you or at least steer you in the apparent right direction. If not, congratulations! They either don’t care or they consider you an independent adult…good luck! But it’s not all doom and gloom and panic, you’re as smart as you’ll ever be now, though not as wise, that comes with age but you are smart enough to know you don’t have time to waste. You really don’t and here is a little video to cheer you up:

While science though the advances in technology helps improve our physical standard of life  art can in many ways improve our mental, emotional, call it even spiritual standard of life. Artists are still  needed and because of their curiosity, creativity , sensibility and all around craziness they achieve something that other people don’t  want to achieve. And that is good and normal and hopefully someday we will have enough robots  to do our mind-numbing work for us so that we can all be as creative and crazy as artists, that all accountants, doctors and engineers won’t  have to spend time doing practical things and can focus on inventing new things all the time!

Creativity is a integral part of ourselves and we seem to be hardwired to want to to things better, more efficiently, to perfect and improve what we’ve discovered or invented. I believe we only loose if we snuff that out and just try to get more obedient and mindless employees instead of motivated and enthusiastic people  . Here is an interesting article from BBC – Earth on why we are the only species of hominid to have survived. It delves among other topics into the implications of art in easing communications between different people and how tool using and developing multiple ways of solving problems helped us survive.

Now coming back to out discussion about careers. Since I am a “melancholic” I like making lists because it helps me organize my thoughts and I feel that I’m making more informed decisions. Therefore when I was in my last year of high school I made a list to help me choose a career in life. When I was little I wanted to be happy when I grew up, if that meant being a doctor, a firefighter or a princess it was fine by me.
So here is my career list: 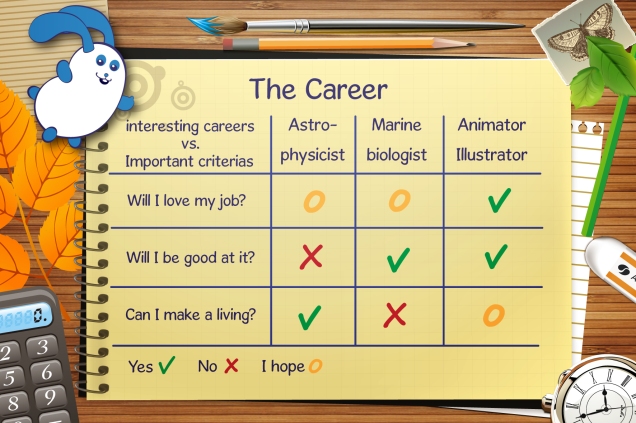 I wasn’t very good at “serious” math so physicist was out of the question and gutting fish and chasing them around isn’t as fun in reality as they make it out to be on TV . The way I see it if you don’t like something you’re never going to be truly good at it and in consequence you’re pay will reflect that.

Also another thing I took into consideration was the group of people I would be a part of. To me animation and illustration offered the creative outlet I was looking for and the community I would fit in. I ended up getting two degrees because my parents were afraid I would starve to death as  some relatives had. Funny enough I was the add ball out at Marketing school because I didn’t care that much about money  and had more philosophical and moral concerns about my work that seemed pointless to most of them and at Film school I was odd because I did care to much about money and other people’s opinions and I wasn’t creative enough.  You just can’t please everyone and there is no point in denying that  you can’t make great works of art anywhere anytime with just the sweat of your brow. The cold facts are you need money and people, not just time, talent and skill. DaVinci and Turner had patrons and the Lord of the Rings trilogy employed a nation almost. So where you could fit in all of this if you wanted to be a part of it is up to you, just ask yourself some questions and I’m sure you’ll figure it out!

If it was of help to you please leave a comment as to why, also I’d love to know why you became an artist. I never saw it as a romantic way of life it was more that I feared hating my job and all that that would imply. I could never hate drawing, not even if I did flyers and buttons for McDonalds.

< Previous Next >
+ Add your own event Eventbrite

#HisameNews: what I’m working on